Part 1: What is Unit Testing?

The main idea behind unit testing is rather than test an entire script or application manually, we automatically test each unit of code that comprises it. In Ruby this frequently means testing each method or each code block. With proper unit testing in place you’ll be able to quickly identify any underlying issues with your code.

Note: Although we’ll be using Ruby and MiniTest for most of this lesson, most of the concepts are universal. There are testing frameworks for Bash too, and while we’re going to start with Ruby, we’ll eventually be writing Bash tests as well.

There are several options out there, but the testing framework we’re gonna be using for Ruby is called MiniTest.

Run gem install MiniTest or put the following in your Gemfile and run bundle install:

So the first thing we need a script to test. so let’s make one real quick. Save the following as add.rb:

Now this method and script may be so simple it’s impractical, but it will help me illustrate a few points, so stay with me.

AddTest is the name of our test suite. It’s where we’ll put all the test statements for the Add component.

All test methods should begin with “test_”

Run the test with ruby add_test.rb You should get something like the following:

You get a dot for each passing test. Of course our test is currently blank, so it’s not very useful as it doesn’t actually test anything. In order for tests to be meaningful they must contain an assertion. An assertion is a way of stating in code what you expect a block of code to do. They are the heart and soul of unit testing. Let’s make our first one.

We’ve renamed test_something to be descriptive of what we’re testing and added an assertion. Save and run this and you get something like the following:

Now we have 1 run and 1 assertion; we’re making progress. The dot means that our test passed, but let’s take a look at what happens when a test doesn’t go so well.

Edit the test suite again to add a test that we will know will fail:

Save and run you should get something like the following:

Uh-oh! F stands for failure. However, all is not lost. As you’ll see later, you’ll actually be writing a lot of tests that initially fail. From the output we can learn a lot, including the test name, the line number, the expected result and the actual result, all of which would be very helpful if this was an actual broken method we cared about.

Did you notice something else though:

It looks like the failing test (the F) was run before the passing test (the dot), even though it’s the second test in the code; that’s not a mistake. MiniTest randomizes the order it runs your tests on purpose. Each of test should be independant and test one thing and one thing only. If a test will only pass if another test is run first, you really can’t say it’s testing only one thing, so MiniTest randomizes the order to force you to write good, independent tests.

Error and failure are not the same thing

After assertions and failures the next item in the list of results is errors. Let’s fix the second test so that it passes and add a new 3rd test that will error to see what happens when a test errors out.

Save and run and you’ll get something like the following:

Much like the failed run above, we get some details on what happen. Also rather than breaking the script MiniTest rescues the error and moves on to the other tests.

The last item on list of results is skips. This one is pretty simple. Put the line “skip” at the top of any test method and the test will be skipped. Let’s skip the third, erroring test for the moment:

Run it and you get:

As the message states, you can run test scripts with –verbose for added details on each test.

The Advantages of Automated Tests

Hopefully at this point the advantages of having test scripts for your code is self-evident:

To be clear, automated testing is not a magic bullet, and it won’t fix or find all of the problems with your code. I do believe that over time, it will greatly improve code quality.

Writing Code That Can Be Easily Tested

Okay so hopefully you’re now on board to writing tests with your scripts. To make that process easier you should make it point to write code that can be easily tested. Here’s some guidelines:

1. Wrap most code in methods/functions, and then call them one by one at the end of the script in a run-time block
Unit testing depends on units. You need clearly defined units of code with expected input and output that can be run and re-run. In order to accomplish this you need to wrap almost all of your code in lots of small functions and/or methods and then pass the parameters and results between them. This not only makes for easily testable code, it makes for cleaner, more organized code too.

2. Your scripts can’t fire off immediately when required/sourced
Because MiniTest has to load the target script in memory in order to test it, your script can’t start as soon as it’s required. On the other hand, we’ll always need scripts that start as soon as they’re called directly in Bash/cron. To resolve these two seemingly conflicting requirements, you’ll need to structure your code so that it only fires off when called directly. Fortunately this can be easily accomplished in most languages.

The Bash equivalent is:

With all this in mind, it should be clear that it’s much easier to write tests and code together as you go, rather than write tests for existing code. This approach has been formalized into something called Test Driven Development or TDD. 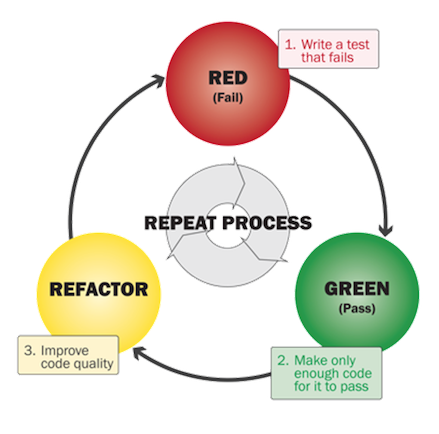 1.Write your tests first
As we saw above, your tests can serve as a kind of outline of the script itself. Before you do any coding, write out your tests. Simply having the tests their will help you organize your code and data flow. Ideally at this stage your tests would all fail (Red)

3) Refactor
Just because your test passes, doesn’t mean that it’s great code yet. Evaluate what you’ve written and see if it can be cleaned up at all.

4. Rinse and Repeat
Re-run your entire test suite and begin working on the next test. As you work you’ll need to make lots of small modifications to your tests and code so that they both do what they’re supposed to do. It may take you some extra time to start, but over time you’ll get the hang of it

One thing I’ve read over and over when studying up on unit tests is that writing good, helpful unit tests is hard, and takes time. We’ll soon get the hang of it, but here’s some tips:

We’re really only scratching the service here. In our next installment we’ll go into some real world examples and look at things like setup and teardown methods.